Temecula Rotary Club called Pacific Mobility Center and spoke with Jeff Conner (Owner) for help getting a Wounded Warrior up and down his stairs at his temporary home he is living at until his new residence is built. Jeff Conner called Mike Bruno, President of Bruno Independent Living Aids (Largest US Stairlift Manufacturer located in Wisconsin). Mike was eager to help by donating 2 new home stairlift units. Mark Holat from Bruno made a special trip to California to help out. The Temecula Rotary club was also ready to help out and our team was set. We then put a plan into action and proceeded forward with helping out a truly great person.

We were fortunate enough to have Jim Brunotte and wife Gerry, make a guest appearance. Jim was wounded in Vietnam and lost both legs, a hand and an eye. What a wonderful group of folks all coming together to help out. Pacific Mobility Center’s technicians, with Brian Conner in charge did an incredible job installing the 2 New Bruno Stairlifts in the home. Grab bars and other items were also provided. 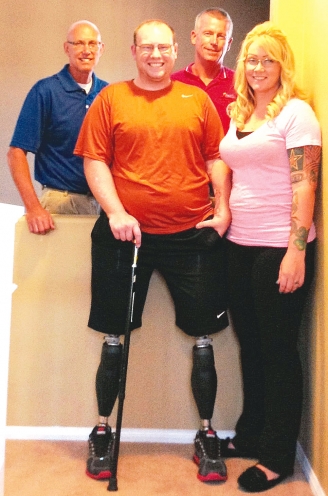 Background
Corporal Jonathan Schumacher, from 3/7 India Company, was serving his second tour in Afghanistan when the unthinkable happened. On October 30, 2011, while on a security patrol in Sangin, Afghanistan in the Helmand province, Cpl. Schumacher stepped on an IED and his life was forever changed. His brothers from his squad and platoon rushed to his side to cover Jon and aided in a rescue operation. Navy corpsman Ryan Davis performed life-saving procedures until a medical evacuation helicopter arrived. When the Marines called the attack in, they classified Jon’s injuries as a three-limb amputee. A statement from his Captain read, “even while Jonathan was being treated, he led his Marines to ensure their safety. At one point, he sat up on his own power to direct the area they should clear and the places they were to watch as enemy combatants attempted to maneuver on their position. It is truly a testament to his courage and bravery that even under the most chaotic conditions he still worried about the safety of his brothers before his own injuries.” Jon was loaded onto the helicopter and taken to Camp Bastion, Afghanistan which had the closest field hospital then to Baghram air field. After being stabilized, he was moved to Germany where surgeons performed outstanding operations to save his left arm. Jon then was moved to Bethesda Naval hospital in Maryland. His wife Courtney, arrived the next day while eight months pregnant with their second son.

Recovery
Jon was blessed to be by his wife’s side when she gave birth to Easton on December 17, 2011. On January 21, 2012, Jon and his family, including eldest son Ethan, were transferred to Balboa Naval hospital in San Diego, California. After countless surgeries, Jon has been working with both physical and occupational therapists to learn to walk again and to perfect using the fingers he still has. Along with the therapy, Cpl. Schumacher has had numerous medical appointments helping him recover from the blast and prepare for his transition to life after injury. With many steps forward, the Schumachers have had a few setbacks including lingering infections that forced Jon into a chair and not allowing him to walk for nine months after the attack.

Next Steps
Jon has had difficulty walking with the prosthetics due to his legs being amputated at different lengths. In March 2013, Jon underwent another surgery to shorten his longer leg. The recovery time will be six weeks and he should be back on his prosthetics in eight weeks. He and his family are preparing for his medical retirement from the Marines in the summer of 2013 at which time they are hoping to move to the northern San Diego area where Jon will be able to continue his rehabilitation.

Why Your Support is Needed
The First Annual Corporal Jonathan Schumacher Golf Tournament was a huge success, but in order for the family to gain more independence, more financial support is needed.

Jon and Courtney are awaiting approval to be selected by an organization that builds homes for wounded warriors. The home will be a basic structure; additional monies are needed to make the house a home. Before the home is built they will be renting a house that needs to be retrofitted to accommodate his needs.

Jon is in need of an adaptive truck that is better suited for his family’s activities.

Jon’s desire to go back to school will be paid for by the GI Bill. They will pay for the first four years, but he is ambitious and is pursuing a degree in mechanical or structural engineering. Courtney is also pursuing a different career path and will be attending school. With both parents in school, funds are needed for daycare and everyday life expenses.

Whiskey, their four year old black lab is now being trained to be a qualified service dog to aid Jon.